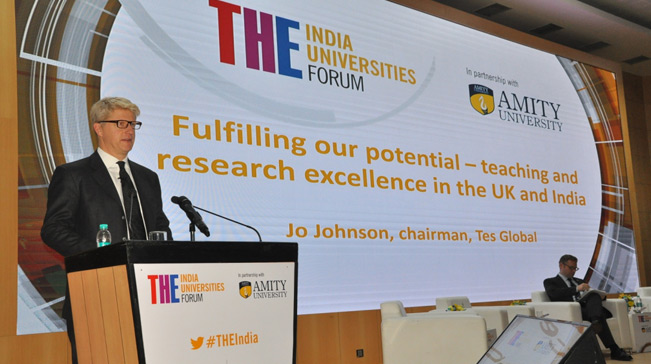 Citing huge potential ahead for Indian universities and to rise up the global rankings, experts called for extensive investment in teaching and research along with institutional autonomy and academic freedom at the Times Higher Education (THE) India Universities Forum in partnership with Amity University that concluded today at University campus, Sector 125 Noida.

In his keynote address, Jo Johnson, Chairman, Tes Global and Ex- Minister, UK Universities talked about ‘Fulfilling our potential: teaching and research excellence in the UK and India’ and shared how India is on a hyper growth phase in its higher education journey and as it seeks to rise up the global rankings of research intensive institutions on the research side. Drawing comparisons with the United Kingdom in the similar journey, Johnson shared how both India and the UK faced similar challenges in the sphere of higher education. “Both the nations faced challenges on how to widen participation in higher education (HE) so that the underrepresented groups can benefit more from all the advantages that HE can offer. To ensure value for money to further ensure that the students get a good return on their investment in HE and get strong outcomes from their time in HE,” he said. Johnson also averred on how similar trials in HE were also faced in sustaining, widening and deepening research excellence and finding means to accelerate the pace of knowledge transfer and innovation. Making a passionate case for institutional autonomy, and freedom from government interference, Johnson shared, "In the UK, as much as in India, our universities will be weakened if we give into those who seek to stifle the views of others when they do not agree with them",

He further added how he was ‘saddened’ to see violence at some of the prominent campuses in recent weeks. “This is clearly not an image of India that’s going to help attract brilliant academics back to support the growth of Indian higher education system as it embarks on its next stage of the exciting journey,” he shared. Charting the path for the future, Johnson said that a supporting funding environment, clear accountability from the universities in return for that supporting environment and openness to talent, international collaboration and partnership are the drivers of success for the UK institutions which could also help Indian higher education institutions to succeed.

Dr. Atul Chauhan, Chancellor, Amity University called Times Higher Education as one of the foremost organizations in this world which is dedicating to the improvement of universities in higher education around the world and showing them the path of betterment. Thanking Jo Johnson for pushing the post-study work visa that has been implemented, during his tenure as Minister, UK Universities, Dr. Chauhan said that it will really help the students of our country. “The topic of the seminar holds great significance for all of us. Leaders at universities in India have understood that it is important to look outwards, to see and face the world and also because organizations like THE have come to India and explained the significance of rankings. It is important for us in the field of academics to benchmark globally, to see what is happening around the world and where we need to aim for the next step. International governments are looking at the quality of Indian education and are putting their money and inviting Indian Universities to come and establish campuses,” shared Dr Chauhan.

Phil Baty, THE - Chief Knowledge Officer shared that Indian Universities are improving in the global rankings. “This is a real cause for optimism in Indian Higher Education. Also, India’s ranked universities have increased the quality and quantity of research publications,” said Baty who also informed how THE was also reworking the ranking matrix and calling it Ranking 3.0.

Nicholas Dirks, former chancellor, University of California, Berkeley talked about ‘The globalization of higher education in India: history and prospects for the 21st century’ and shared how even before independence, education institutes were established in a big way. “It is commendable to see private universities and colleges in India have offered an important and compelling opportunity to students as the country’s economy continues to grow and expand and India no longer needs to rely to the same extent on educational opportunities abroad,” Nicholas Dirks who also advocated that investment in HEIs will need to keep up with the demand.

Way Kuo, President, City University of Hong Kong while participating in a discussion on ‘Internationalization in India: experience and opportunity’ advocated for all university teachers to pursue research and shared that “Research is not about publishing papers, it is about pursuing your curiosity.”

V. Ramgopal Rao, Director, Indian Institute of Technology, Delhi shared that while a number of research papers were being written by the Indian academicians, but we tend to be very weak in converting these researches into wealth. “Investing in startups at an early stage would be a successful strategy for the future,” shared Rao. A host of vice-chancellors from across the country participated in the widespread deliberations on India’s performance in the rankings and reforming India into a knowledge society. 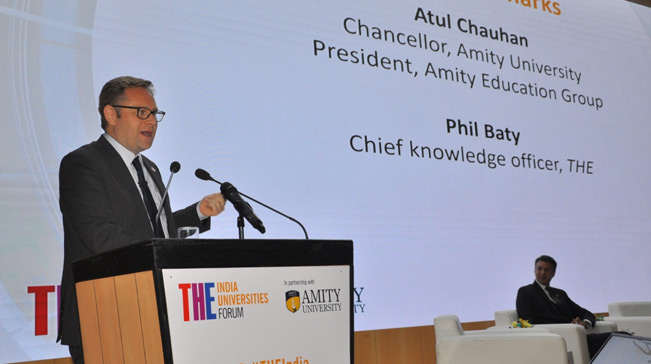